So you want to do codeless provisioning with FIM? No problem you just go ahead and use the built-in features of Synchronization Rules. However, if you don't want to use Synchronization Rules for whatever reason, you may want to take a look at  FIM Metaverse Rules Extension (FIM.MRE).

It's basically a framework that's I've been evolving over time (since MIIS/ILM) and now decided to release for public use with FIM. Basically, it allows you to do provisioning in the FIM Synchronization Service without using Synchronization Rules (SR's). You could, of course, combine this framework with SR's and built a great synchronization solution with the two playing together side-by-side.

There is an initial version 1.0 of FIM.MRE out with documentation (you can find it here http://blog.goverco.com/p/fim-provisioning-framework-fim-mre.html). Documentation and code will evolve as I expand it for my upcoming FIM projects and I'll try to release in regular cycles. It is already being used at some of my customers and more will probably adopt it in the near future. 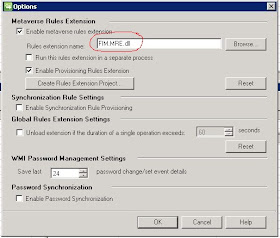 So, give it a go and let me know what you think. And please feel free to leave suggestions and comments on the page to encourage further development.
Søren Granfeldt at Monday, September 24, 2012
Share